Congratulations to the Gilbert Public Schools’ graduating class of 2022! Hooray, you did it! We are incredibly proud of your success and all that you’ve accomplished while being a student at GPS. Continue to strive for excellence as you pursue your next chapter. We are rooting for you! 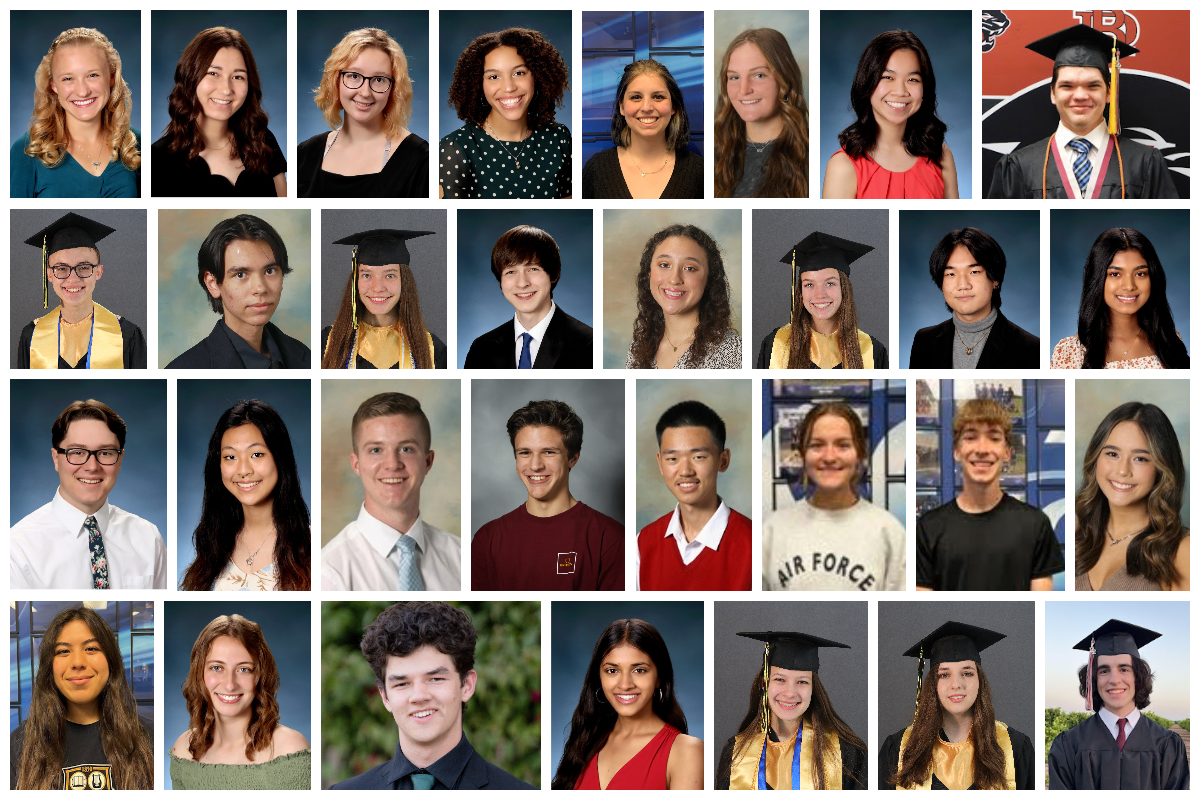 For families and friends who would like to join us in celebrating our GPS graduates, you can find the graduation ceremony broadcast details below.

The graduation ceremony for Campo Verde High School students will be held Thursday, May 26, 2022 at 7 p.m. | View here

Brendan Calalang is one of two valedictorians representing the class of 2022 at Campo Verde High School. While at Campo, Brendan participated in the French Honors Society, Creative Writing Club, and the Political Science Club. Brendan will attend Tufts University and pursue a career as a research psychologist.

Connor Stewart, co-valedictorian at Campo Verde, participated in multiple clubs as a Coyote. Connor was a member of Link Crew, National Honor Society, Spanish Honor Society, and the tennis team. Connor also served with the Boy Scouts outside of school, reaching the highest level of achievement in scouting, known as Eagle Scout. Conner plans on becoming an electrical engineer after attending the University of Texas at Austin.

Brooke Rivera was named salutatorian for the class of 2022 at Campo Verde. As a Campo student, Brooke was involved in the Best Buddies program, Biomed Club, Spanish Honor Society, National Honor Society, and Key Club. Brooke will attend the University of Pennsylvania and study to become a pediatric oncologist.

Abigail Wasserbeck is a recipient of the Coyote Excellence award. While at Campo, Abigail was a member of Link Crew, National Honors Society and participated in Sports Medicine. Abigail also took part in the Student of the Year campaign sponsored by the Leukemia & Lymphoma Society. Abigail will attend Arizona State University and study to become a physician.

Kathy Choi is a recipient of the Coyote Excellence award. As a student, Kathy was a member of the Student Council and the Key Club. Kathy plans on attending Arizona State University and studying to become an environmental lawyer.

The graduation ceremony for Desert Ridge High School students will be held Thursday, May 26, 2022 at 7 p.m. | View here

Kyler Harden is the valedictorian of Desert Ridge High’s class of 2022. Kyler will attend Grand Canyon University and pursue a career in software engineering in hopes of developing methods to solve real-world problems. As a student, Kyler was part of the Robotics Club, and outside of school, Kyler enjoyed bowling.

Pete Selles, co-salutatorian, will attend the W.P. Carey School of Business at Arizona State University. Pete hopes to pursue a career in finance. As a Jaguar, Pete was a member of the tennis team and Language Club. Pete was named Homecoming King, Mr. Desert Ridge, and the German Bee Winner. Pete was also active off-campus, serving as a member of his church youth group and working as a grocery store cashier.

Garrett Weissert, co-salutatorian, was a member of Desert Ridge High’s football team, men’s volleyball team, and a member of the National Honor Society. Garrett will attend the Colorado School of Mines to study computer science and quantum computing.

Tyler Blunt is a recipient of the Spirit of the Jag award. As a student, Tyler participated in the Best Buddies program and cheered on the DRHS athletics programs. Outside of school, Tyler enjoyed playing Challenger Baseball, a variety of Special Olympics sports, traveling, studying maps, and cooking with friends and family. Tyler will continue his education by enrolling in the Gilbert Public Schools transition program to further his learning, independence, life skills, and vocational training. Tyler’s long-term goal is to operate a food truck with his family, and travel the country sightseeing and making great food.

The graduation ceremony for Gilbert Classical Academy students will be held Wednesday, May 25, 2022 at 6:30 p.m.

Ayla Young, co-valedictorian, will attend Union College and study biological sciences. While at GCA, Ayla participated in the National Honor Society, Outdoors Club, Future Doctors Club, GCA Orchestra, and Varsity Cross Country. Ayla was also a team leader for Arizona State University - EPICS. She participated in the Perry Initiative for Women in Medicine and Engineering as well as the Virtual Olympiad.

Kathryn Beistle, co-valedictorian, is heading to Yale University to study political science with a concentration on philosophy. Kathryn was part of GCA’s Speech and Debate team, Mediatography, National Honor Society, Varsity Track and Field, and Varsity Dive. She also served on the Mayor’s Youth Advisory Council, Beyond Resolved, and When We All Vote.

Khushi Parikh, co-valedictorian, will attend the Massachusetts Institute of Technology, where she will study computer science and neuroscience. At Gilbert Classical Academy, she was part of Model UN, Academic Decathlon, Varsity Tennis, Robotics and National Honor Society. She was also part of HOBY Youth Leadership, Civic Air Patrol and Odyssey of the Mind.

Yu Lan Zhong, co-valedictorian, will attend the University of California - San Diego to study human biology. As a student at GCA, she was a member of Speech and Debate, Model UN, National Honor Society, Activism for Our Lives, Student Senate, Academic Decathlon, Mediatography, and a tutor with the Tutoring Center. Her off-campus extracurricular activities included badminton.

Neo Pyon, co-salutatorian, will be attending Arizona State University - Barrett Honors College, where he will major in computer science and minor in business. As a GCA Spartan, Neo was part of the National Honor Society, Varsity Chess team, Varsity Baseball, Band, Future Doctors Club, Latin Club, Student Senate, and Activism for Our Lives. When he was off campus, Neo was part of the East Valley Yamaha School for Music and the regional AMEA Band.

Jillian Urrea is the recipient of the Principal Leadership Award.

Jared Kennedy was named Spartan of the Year.

The graduation ceremony for Gilbert High School students will be held Thursday, May 26, 2022 at 7 p.m. | View here

Brooke Hesse, co-valedictorian, will be heading to the University of Arizona to further her education. As a Gilbert High Tiger, she was a four-time Golden Scholar and leader of the Dude Be Nice Club. Brooke also was captain of the Varsity volleyball team and played soccer, basketball, and beach volleyball. She also was a member of the National Honor Society, and while off-campus she participated in Club Volleyball, Club Soccer, and helped to tutor students.

Jack Miller, co-valedictorian, will attend Arizona State University after serving a two-year mission in Curitiba, Brazil. Jack will study electrical engineering and pursue a career in robotics. As a student at Gilbert High, he was a Golden Scholar and a National Merit finalist. He was a member of the Chess Club and team, Tiger Crew, Math Club, and the International Baccalaureate Club. His off-campus activities included being a Youth Leader for his church and being an Eagle Scout with the Boy Scouts of America.

Julissa Brunk, co-valedictorian, will attend Arizona State University and pursue a career in the medical field. While at Gilbert High, she was named Student of the Month for the Math Department. She also was a National Merit Commended Scholar, a Golden Scholar, and received an FFA Award for Scholarship. She was a member of the Bring Change to Mind Club, volunteered with the Giving Closet, a member of the Environmental Action Club, National Honor Society, Tiger Crew, and the International Baccalaureate Club. While not on campus, Julissa could be found hiking or playing the piano.

Saige Langer, co-valedictorian, will attend the University of Arizona and study to become a pediatrician. As a Gilbert High Tiger, Saige was a Golden Scholar all four years of high school. She was also named an AP Scholar and performed more than 600 hours of community service. Her on-campus activities include Varsity Tennis, Varsity Badminton, president of ADL, Environmental Actions Club, National Honor Society, president of DECA, Tiger Crew, and president of the Sports Medicine Club. While off-campus, she was a member of the United Synagogue Youth Group.

Veronica Scanlan, salutatorian, will attend Arizona State University to fulfill her dreams of becoming a financial advisor. Veronica was a Golden Scholar while at Gilbert High. In her free time off-campus, she volunteered at the Good Shepherd Healing Ministries Horse Rescue.

Kaden Arnold, co-valedictorian, will attend the United States Air Force Academy. He plans on pursuing a career in aerospace or astronautical engineering. As a student at Highland, Kaden was a member of the Yearbook and the National Honor Society. He also volunteered at a food bank, was a leader of his church youth group, and also wrote and published a novel.

Lauren Basye, co-valedictorian, is heading to Montana State University after receiving a Merit Scholarship and Golf Scholarship. She will study environmental engineering. As a Highland Hawk, Lauren participated in golf, the National Honor Society, volunteered at Towne Meadows Elementary, and completed an AP Capstone Research project on hydrokinetic turbines.

Claire Cheah, co-salutatorian, will attend Georgetown University’s Walsh School of Foreign Service. She plans on becoming a foreign relations ambassador. While at Highland, Claire was president of the National Honor Society, a part of Highland Hackett’s Pom Team, a member of the American Legion Auxiliary Girls Nation, and the National Charity League.

Ernest Lu, co-salutatorian, is heading to the University of Southern California, where he will study computer science. Ernest participated in basketball, soccer, ADL, Model UN, organizing workshops, and Theater while at Highland High.

David Samsor will receive the Spirit of the Hawk award.

Claire Cheah and Aidan Maes were named the Academic Senior Speakers for the Class of 2022, representing the top 2% of their graduating class.

Sophia Kim, co-valedictorian, will attend the University of Rochester and pursue a career in psychiatry. Her off-campus activities included Taekwondo and art.

Abby McDermott, co-valedictorian, will further her education at the University of Arizona. While a student at Mesquite, she was part of the National Honor Society, captain of the Cross Country team, played soccer and competed in long distance track. She was recognized as a Golden Scholar and received the Wildcat Distinction award from the University of Arizona. In her free time, Abby enjoyed working and hiking.

Mackynzee Acevedo Henry, co-salutatorian, plans on attending Arizona State University and becoming a high school math teacher. Her off-campus activities included working as a math tutor, Phi Theta Kappa, and the National Society of High School Scholars. She was recognized as a Golden Scholar and received a full-tuition scholarship from the Arizona Teachers Academy.