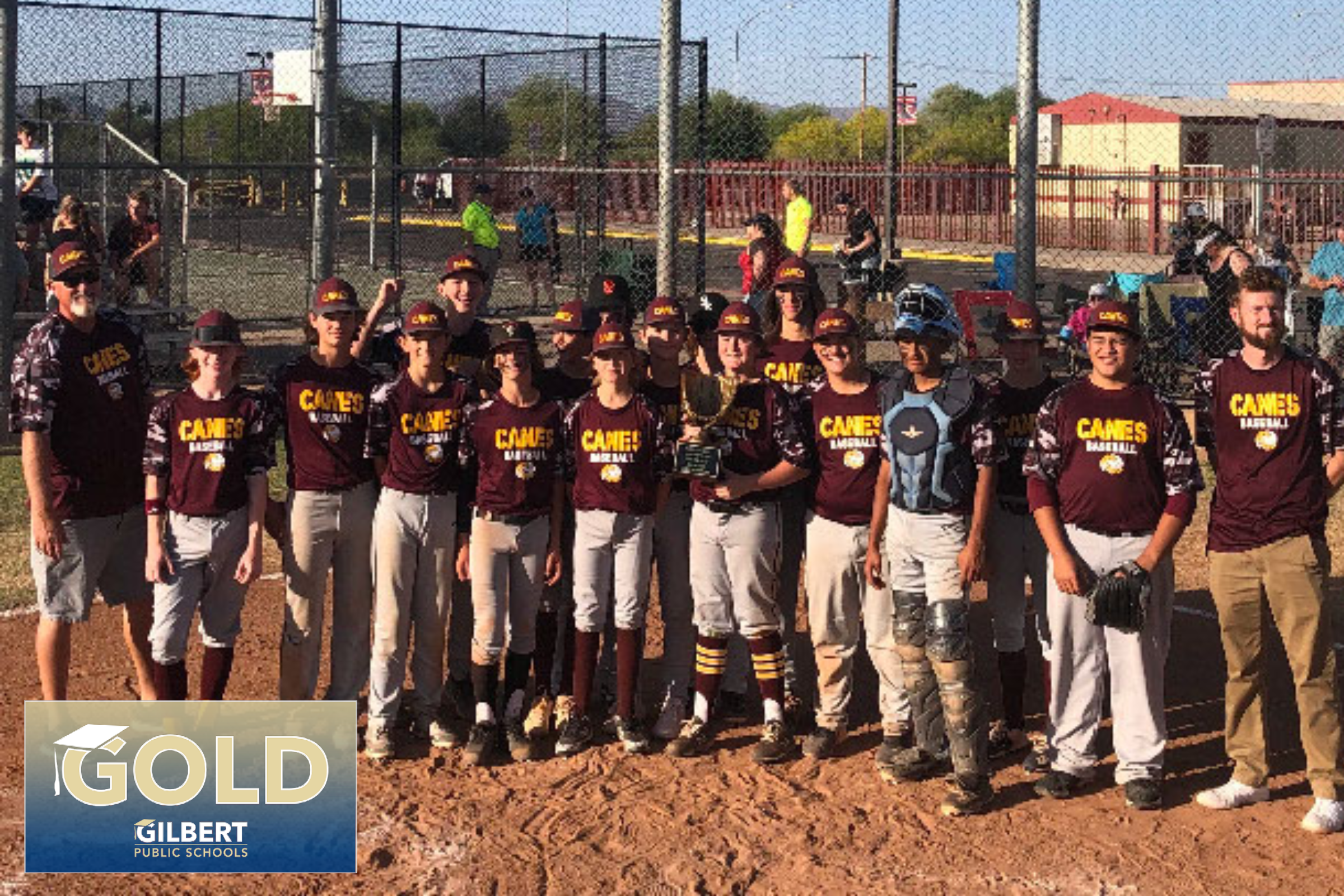 To persevere means to continue on even if the situation before you seems difficult or the road to success feels long. For the Highland Junior High baseball team, giving up was never an option.

“In the championship last year, we didn’t hit at all, but this year we got seven runs in the first inning and that just set the whole game up,” said Nick Rout, an eighth grade player.

The eighth graders still remember the devastating defeat last year in the San Tan Conference Championship. This time around, the Highland Junior High Hurricanes refused to let history repeat itself. In a rematch with South Valley Junior High, they defeated the Sabercats 9 to 1.

Their victory didn’t come easy. As the season got underway, the team focused on having fun and playing to win. Ivan Rubio, an 8th grade catcher and pitcher, shared how he mentally prepared going into each game.

“I try to remember to do my best and try my hardest, but also stay calm and under control,” Rubio said.

At Gilbert Public Schools this year, junior high sports teams competed against each other throughout the season and the playoffs. The Hurricanes practiced every day after school for about an hour and a half with their new coach, Hayden Trudeau.

“It’s been exciting to coach and be part of the school community outside of the classroom,” Trudeau said.

Trudeau also teaches social studies. This was his first year teaching and first year coaching, but he found success in a very short period of time. Trudeau credits his players and assistant coach for really putting in the work.

“As long as we’re having fun and making it so there isn’t a lot of pressure, I feel like a lot of the kids really shined,” he said.

Many of the starters this year didn’t get a lot of playing time last year, but that did not hinder the team. Rout and Rubio say the players remained positive and did not let the performance of the other teams influence them.

“Don’t let what they do affect you. You just have to keep playing,” Rout said.

The boys baseball team had a lot of support, especially in the championship game at home. Students and staff were there to cheer them on as they fought for the title of San Tan Conference champions.

Salazar says the school has seen success in several sports, resulting in multiple championship titles for the Hurricanes in cross country, track and field, wrestling, soccer and baseball. Not only does Highland Junior High provide a place for athletes to sharpen their skills, but the school also helps shape them into community leaders.

Two captains from each sports team at the school make up the council. They meet once a month with Salazar and a motivational speaker to work through a growth mindset program. Similar programs emphasize the importance of effort, perseverance and practice.

“Along with that program, they are heading up community service at the school and outside of school,” he said, “It gives these kids a voice. Nowadays, those good voices get lost in the bad voices, and we want to shift our leadership on campus.”

The hope is the information taught to student athletes on the council will spread to their teammates and classmates. Both Rout and Rubio say playing for their school is much different than playing a club sport, because they spend way more time around their teammates. The Highland Junior family atmosphere is something they are going to miss when they head off to high school, but they’ll always have their memories and the championship title to cherish.

“We had a lot of fun during the year,” Rubio said, “It’s a great way to end it off - another era of your life.”

To learn more about Highland Junior High and the sports programs, schedule a school tour or enroll today!