Stories like this one remind us all that dreams really do come true. Astha Dedakiya’s dreams just happened to come to fruition before she even graduated from high school. The 18-year-old Gilbert Classical Academy (GCA) senior is on her way to Hollywood to work with top writers in the entertainment industry. She recently signed a major deal with Lionsgate to turn her script into a movie. Production won’t begin for several years, but Astha’s journey will start this fall.

“I didn’t think this was going to happen. I’m very excited,” Dedakiya said.

This type of opportunity is extremely rare for adults, but for 18-year-old high school students – it’s nearly impossible. Dedakiya’s movie script fell into the hands of Lionsgate’s creative directors. They were so impressed that the studio tracked her down to get a deal on the table.

“Film is something I’ve always loved. This being a reality is just mind-blowing to me,” she said.

Most people are wondering what her story is about, but the contents of Dedakiya’s script are being kept under wraps for now. She is, however, able to discuss what got her to this point in her journey.

“Sophomore year, my dad and I decided to write short scenes just to share with my mom as a fun dinner activity, and it was supposed to be nothing more than that,” she said.

Dedakiya quickly realized that she enjoyed the writing process. She took those short scenes and started weaving together a script of her own. By the end of her junior year at GCA, the script was finished. She was quite busy with her studies, so she left the script in Google Docs for about a year, until one day she decided to send it to Arizona State University’s The Sidney Poitier New American Film School for feedback.

“Dead silent. I didn’t hear back from anyone until January 2022, when one of the professors emailed me back with some great advice,” she said. 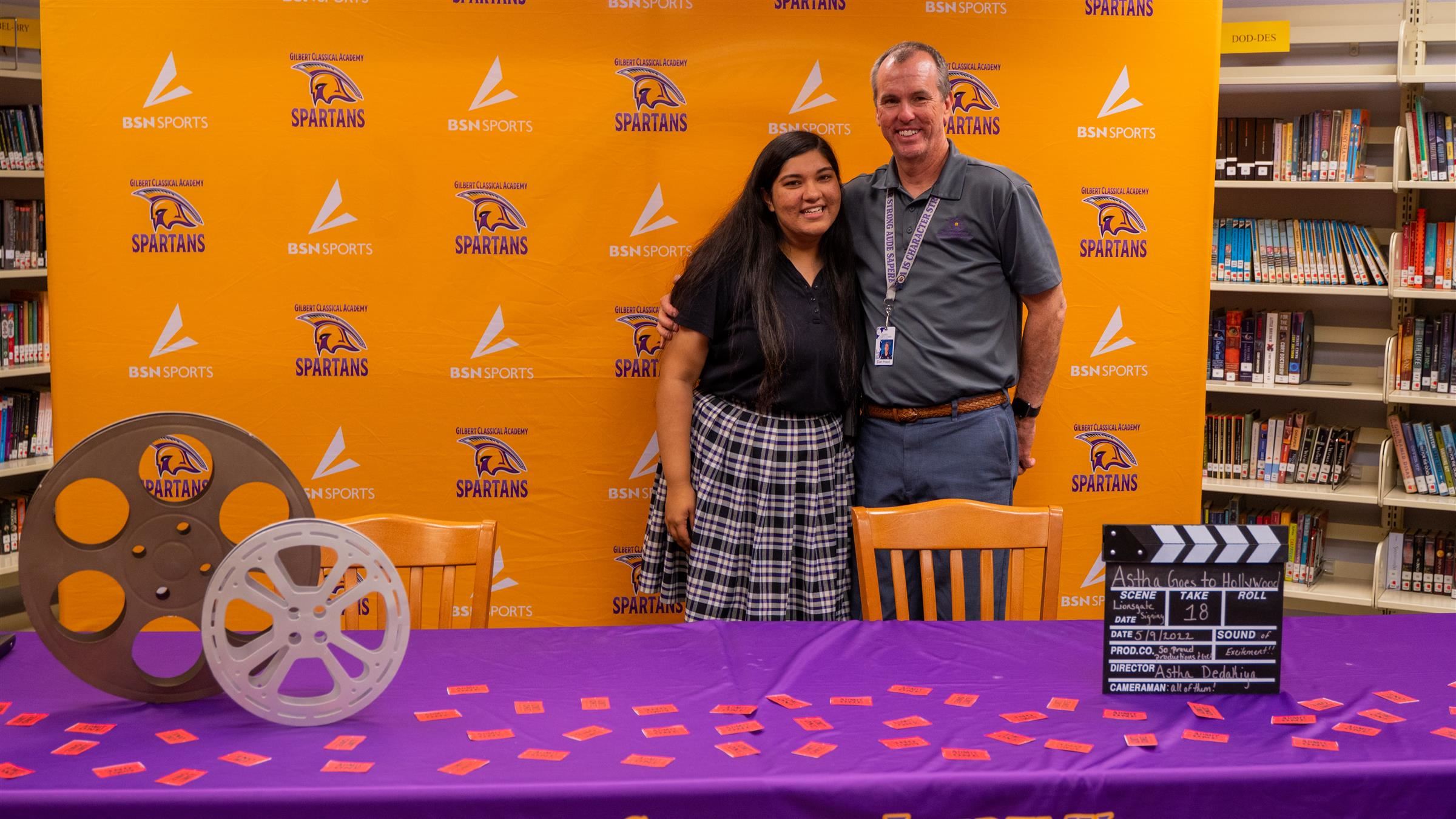 She took the advice and did some revisions, but that was about it. Dedakiya didn’t think about the script until three months later, on April 1. She received an email from the team at Lionsgate, but it was April Fools’ Day, so she deleted the email thinking it was a joke. It was far from a joke. Dedakiya’s life was about to change.

“They told me that the script reached their creative directors and they were interested in talking to me,” she said.

They scheduled a Zoom meeting with Dedakiya, which included the creative directors of the series, “Breaking Bad.” Lionsgate offered the teenager a contract for an internship working on major TV and movie sets like “Bridgerton” and alongside award-winning directors like Steven Spielberg, a full ride to the University of California - Berkeley, and during her internship she will work with writers to polish her script so that it will be ready to go under production in 2025.

“I’m definitely nervous. It’s a big responsibility. I’m very happy that they trust me,” she said, “I definitely think it’s going to be a great learning experience for me. I can’t wait to be with them.”

Her classmates and teachers at Gilbert Classical Academy celebrated Dedikya’s incredible achievement by hosting a signing day celebration, where she put her final signature on the 600-plus page contract. She signed the document using a special family pen that was passed down through generations and given to her by her father.

“I’m very close to these people, so having them here today meant a lot to me,” she said.

Dedakiya’s counselor at GCA sat beside her as she put ink on paper. Nicoleta Alfaro was by Dedakiya’s side throughout this entire process, offering her support and words of encouragement. 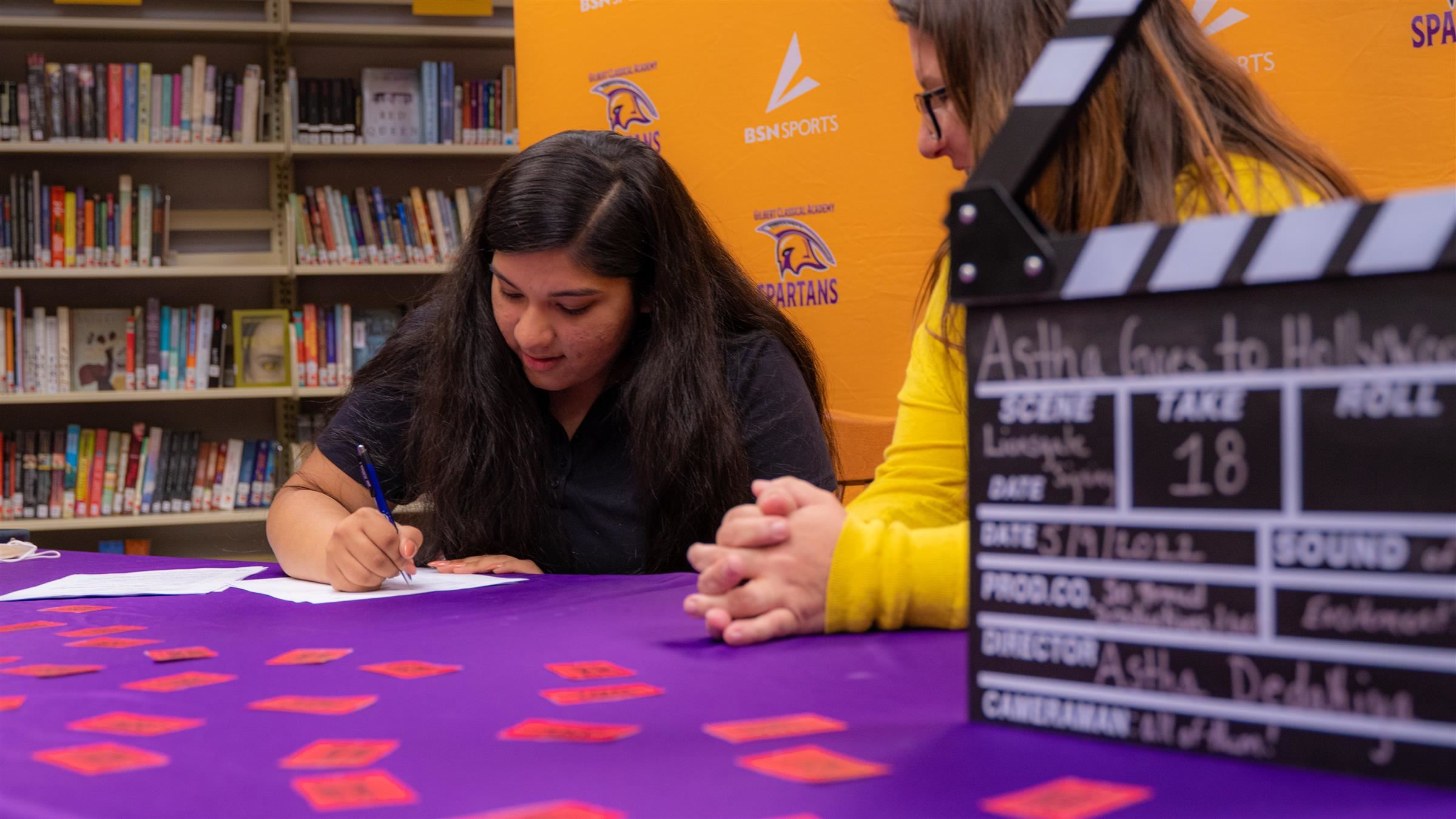 “Mrs. Alfaro was the first person that I always went to. Her being next to me was amazing. I couldn’t have asked anyone else besides my parents to be here,” she said.

Gilbert Classical Academy serves 600 students in grades 7-12. The smaller community is where Dedakiya has found support and a safe space to come into her own. Principal Dr. Dan Hood is proud of her success.

“She is so smart, incredibly wise, caring and resilient. If there is one person who would see this through, it would be her,” Dr. Hood said.

Dedakiya will begin her internship in the fall when she starts school at Berkeley. The next few years of her life are sort of planned out for her, which she feels provides a sense of certainty and relief.

“It’s a lot to handle, but I’m very excited about the next four years. I think it’s going to be a great journey,” she said.