Highland Hawkettes rise and soar to number one 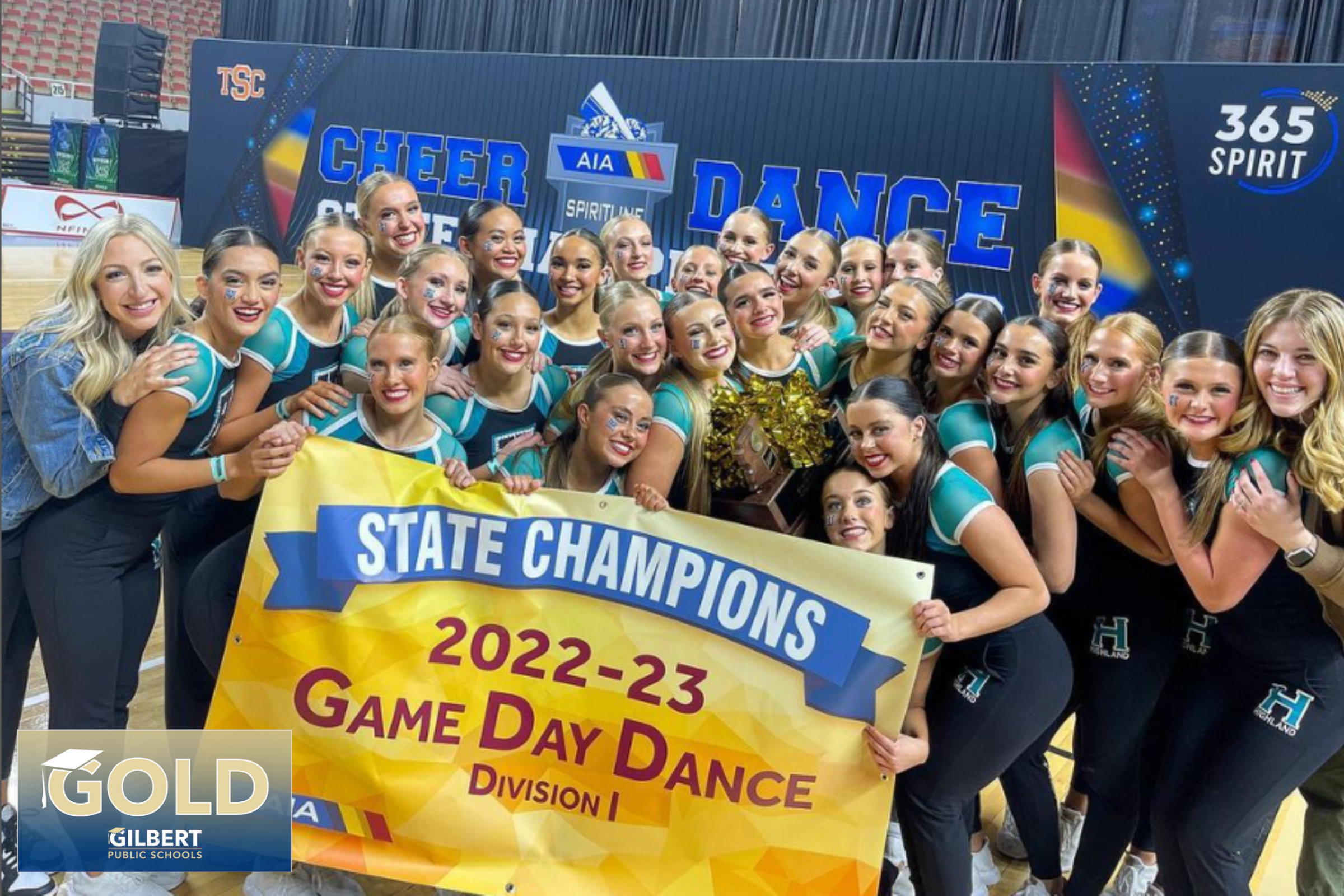 They bring energy, excitement and excellence to every performance, so it’s no surprise that the Highland Hawkettes Varsity Pom Team are 2022/23 state champions! The fierce competitors soared to the top spot for Division I schools last month at the Arizona Interscholastic Association’s Game Day Dance Championship. For the first time ever, pom teams were allowed to take part in the competition – and the Hawkettes won!

“I was very proud of them when they walked off both times, but especially after finals, because I felt like we fixed everything that we needed to,” said Ashley Parcell, head coach of the Hawkettes.

Pom Dance is different from cheerleading, because it is more focused on choreography, patterns, technique and the use of pom poms, while cheerleading incorporates more tumbling and stunts. Pom routines often involve a variety of dance styles, including jazz, hip-hop and modern. For the Game Day Dance Championship, pom teams had to come up with a three and half minute routine featuring their fight song, chants, sideline and halftime performances.

“The routine kind of never stops. It goes from one portion and transitions to the next,” Parcell said.

In order to prepare for the big event, it was all hands on deck. Parcell, along with her assistant coach and two choreographers, spent weeks working with the dancers to make sure they were competition ready.

“We spend hours mapping it out and walking from one formation to the next to make sure they know where they are supposed to go. Then we spend hours on arm angles, counts, head angles, eyes, feet and just all of the details. On top of that, just building stamina to get through a three and a half minute routine,” she said. 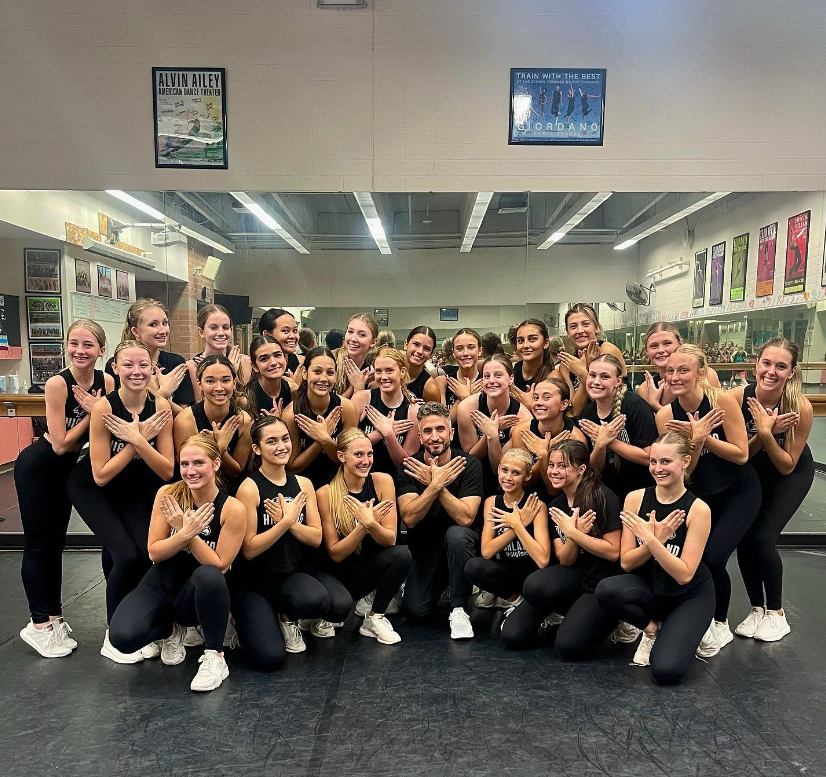 There are many long school days and dance rehearsals. For the 28 girls on the team this year, it takes a lot of sacrifice, determination and heart to be a Hawkette, but they say it is all worth it.

“I feel like I can lean on my team when it comes to homework or pom. We’re all kind of in this together. We’re doing school together, but we’re also doing practice together. It’s nice to have that community,” said Lia Hinze, a Highland High junior and Hawkettes co-captain.

Pom Dance is a year-round sport at Highland. Tryouts for the Hawkettes are typically in the spring. Training goes throughout the summer. Fall brings football season, and winter brings competition season. The varsity pom team is heading to three more competitions this year, including national events in Orlando, Florida and Anaheim, California. Beyond the awards and recognition, the Hawkettes say that they are gaining skills that will continue to benefit them throughout the rest of their lives.

“Dance and Pom are like having a full-time job. You are learning from a young age how to manage your time, be a team player, how to be a team leader, how to communicate, rely on people and just do everything,” said Summer O’Haver, a Highland senior and Hawkettes co-captain.

O’Haver, Hinze and the team’s third co-captain Kadie Watson all have dreams of continuing their dance careers beyond high school. As a senior, O’Haver is already weighing her collegiate-level options, considering either The Ohio State University or Louisiana State University. Hinze and Watson, both juniors, are also exploring what could potentially be next for their dance careers.

“Collegiate-level and maybe the NFL. I don’t really know what college yet, but we’ll see,” Watson said. 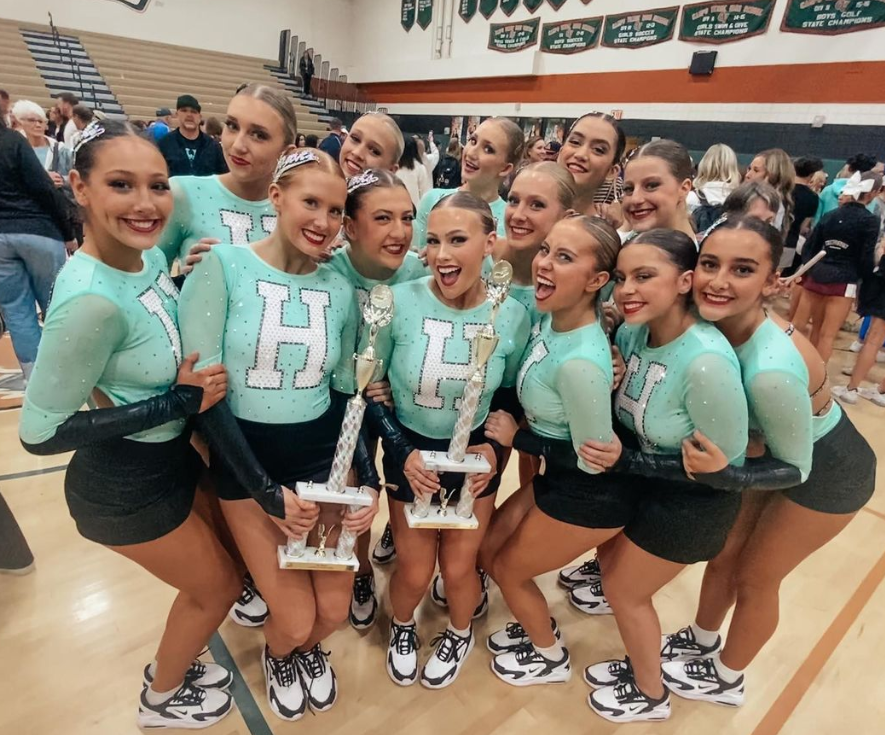 The Hawkettes have a huge support system locally as well as a huge fan base online. On Instagram alone, the team has more than 10,000 followers, allowing them to inspire dancers across Arizona, the nation and the world.

“I found them on Instagram, and I knew about Highland. I came here because of the pom team. I saw all of their wins and stuff,” Watson said.

While winning performances are what they aim for in competitions, Coach Parcell says being part of the pom team is so much more than a trophy.

“It’s about having them leave here knowing that they had an amazing experience for however many years they were on the team, and also preparing them for college and the big adult life. Just making them good humans,” she said.

To learn more about Highland High and the Hawkettes, schedule a school tour or enroll today!