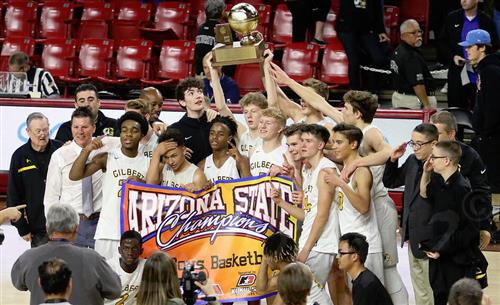 It was a long, hard journey Monday night for #1 Gilbert and the team aspect that guides the program persevered to the final buzzer in securing the school's fourth-ever boys basketball title.

Gllbert overcame a 12-point deficit in the third quarter and was sparked in the fourth by a "missing piece" the first three quarters in coming from-behind to edge upset-minded No. 6 Millennium, 38-37, in a battle of Tigers at Wells Fargo Arena.

The win marked Gilbert's first title since 2003. Gilbert (29-1) also won titles in 1985 (4A) and 1962 (2A) and took runner-up in 1970 (2A). Millennium, which led three-fourths of the game, grudgingly settled for a runner-up finish at 22-7 iin coach Ty Amundsen's second year at the helm. Millennium was bidding for the school's second boys hoops crown.

Gilbert coach Jay Caserio, watching his team celebrate after recording ts 27th win in a row, looked back succinctly at his team's makeup in winning its final two games by one point each. Gilbert's only loss this season is to 6A No. 1 seed Pinnacle.

"Well, Carson Towt (13 rebounds) is our best player, and has been all year "Caserio said. "Doc Self is the best leader I've had in 12 years hands down. Not only for this team, but for our school and community. Jake Ehmann, (13 points, 13 rebounds) he's been the guy in the playoffs. He's led us in scoring all four games and quietly has given us almost a double-double average for the year. He was the MVP of this game.

"Having Paul (Maldonado) out there the whole second half allowed us to open up the court. Brycen (Long) played tonight, but wasn't himself. He had a concussion and hurt his back against McClintock and just got cleared to play this weekend. I don't think he scored, but he gave us all he had."

So how did Gilbert manage to prevail overall and overcome a first half plus a couple minutes of the third quarter when 15 turnovers and no points from three-point range stood out on the stat sheet?

The way Caserio described it. Ehmann was the lone offensive spark in the first half netting eight points and keepting Gilbert within striking distance at half, 21-16.

Millennium stretched its lead to 30-18 early in the third while Gilbert struggled especially on the offensive end. Maldonado, who spent 12 minutes of the first half on the bench with two fouls, helped turn the tide staying on the floor in the second half. His presence made the offense whole and by the time the fourth period began Gilbert saw hope.

The "missing piece" arrived in the form of point guard Doc Self. Self, who tormented Millennium in an 11-point regular season win, made 6 of 11 threes that game. Through three periods Monday he was 0 for 4 from three-point range and Gilbert as steam was 0 for 8. Gilbert trailed as the fourth began, 30-23.

In a 40-second span of the quarter -- 6:42 to 6:02 -Self sank back-to-back threes to pull Gilbert within 30-29. Those were the only threes Gilbert made (2 of 13).A Maldonado free throw tied it 30 all and Maldonado added a put back to give Gilbert its first lead since midway through the second quarter.

Millennium tied the game one final time at 32 on a 10-foot jumper by Justus Jackson with 2:46 to go.

Self didn't score again, but with 1:46 left fed post Carson Towt for a dunk and the lead for good, 34-32. Three free throws by reserve guard Tampa Scott and one by Maldonado extended Gilbert's lead to as much as five down the stretch.

Maldonado's free throw made it 38-35 with 8 seconds left. Millennium's Cameron Wilder fired up a desperation three with two seconds left that missed and a putback by Coleman Fields as the buzzer sounded ended the scoring and left the sixth-seed a point shy.

"Millennium did a hell of a job all season," Caserio said. "They are going to be very tough next year with almost their whole team coming back. We're glad to close this out with a win."

Self said his teammates kept his confidence up even though nothing was dropping for him until the final quarter.

"They were on me to keep shooting," Self said. "I knew at some point I was going to make some. We'd come to far to let it slip away."

Millennium has a pair of very talented sophomores in Jackson and DaRon Holmes. Jackson finished with a team-high 8 points and Holmes was next with seven. Holmes, who had three huge games in the tournament coming in, failed to score in double figures only twice all season. Both those were against Gilbert.